One thing that investor does not like is uncertainty from events and in the recent weeks and months, this has reflected in the market. If you think that this is a good time to short the market, for e,g S&P500, one can invest in a inverse exchange-traded fund(ETFs) as a hedge against a correction.

To short S&P500, one can invest in Proshares short S&P500(SH). As this is an Inverse ETF, you buy instead of short sell. You can refer here for more information about this ETF.

Email ThisBlogThis!Share to TwitterShare to FacebookShare to Pinterest
Labels: s&p500

Financial markets in the region have been hit badly by the news of QE tapering and now the tensions in Syria. Most of the regional indices have reacted negatively and has corrected since, and some people in the forum said we are in Bear market. Most of the experts define the Bear market as a major correction of 20% to 25% from the high, are we there yet?
The correction as some have said was primarily due to funds pulling money out of Asia and putting back to US where the economy seems to be recovering well. The other aspect which caused this correction to happen was also due to the tensions in Syria which we are seeing that warships are being placed out in the Gulf region. This has caused some investors to take money off the table. Lastly, market confidence was also hit slightly, with the China Minzhong sell down and trading of this counter is still halted.

With the above, I was curious as when QE was first introduced how much has the so call 'hot money' cause the index to rise and how much has is corrected due to the recent events. The numbers are not pin point accurate but it serves a good gauge.

Below is a table which I have tabulated; and here's how this table makes up;
1. take the lowest point in 2010 after QE was introduced
2. take the recent high
3. Calculate the gains since 2010
4. % corrected looks at how much it has corrected from the last high
It seems that 'Hot Money' loves everyone except us .... ha..... Looking at the chart, not bad if you have invested in the regional markets, all more than 100% gain. STI has only about 30% gain.

All other markets - The lost is not significant if you compared to the gains that they have made since 2010. If you have made more than 100% from the market, what is a 20% correction then?

With these data, we then know whether this is a healthy correction or not, and should we worry ??

Email ThisBlogThis!Share to TwitterShare to FacebookShare to Pinterest
Labels: General

Regional markets including STI has reacted negatively when news that FED will be tapering down or reducing the QE some time in the near future. If it really happens, how would it affect stock markets, commodities, gold, silver, property, .... etc.

After my last trip to Taiwan, I really like the place and people. Recently, I found this clip(by chance), a finance TV show(夢想街57號) by a Taiwanese TV station, and I thought this is really cool and very informative. One of the guest in the show is Hu li yang(胡立阳), who is very popular is this region. I am a fan of his, found his theory easy to understand, although at times he tends to exagerate a little :)

I wished we have this kind of show here in Singapore so that the public can be well informed about what's happening in the financial world.

11 August, I posted that STI has started the Wave C, and it is heading downtrend. Looking at the chart today(below), this is confirmed when 50MA cuts the 200MA, and this is an indication that the trend has reversed to downward. So are we at the start of the Bear market, well, according to many experts, any index has to correct about 20% to 25% before it enters the Bear zone. At the moment, STI is still quite a distance from there, at this point, it just meant that the trend has changed.

So is it a good time to enter and nimble a little now?

We should not invest against the trend, we should always go with the trend. Any rebound now might be a good chance for you to liquidate those lousy counters as low might be lower eventually. Personally, I will wait for STI to consolidate first after the downward trend slows down. I will also wait for the 10 weekly MA to trend up and lastly, STI has to stand above 3185(pivot point). Once all this is in place, it is then highly probable that STI trends up.

Email ThisBlogThis!Share to TwitterShare to FacebookShare to Pinterest
Labels: STI

Since my last post on Silver, from TA, it seems that the downward trend of Silver has slowed and it has started to reverse up. Although it has crossed the 50MA, it is still below the 200MA. As such, for medium term, the trend should be forming upwards. For long term investor, is it a good time to start buying some?

A few friends asked me given a choice and limited funds, which one to invest, Silver or Gold. Well, though Gold is also reversing the downward trend as well, I am not comfortable investing in it now since both George Soros and John Paulson had sold off most of their gold holdings. We are just small fry, we should always follow the big SHARK right :) 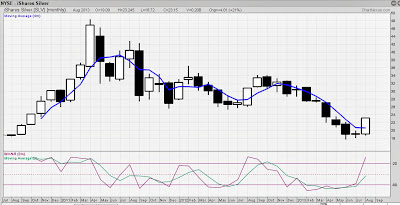 Related post: Time to buy gold and silver?
Posted by Oldman at 14:05 No comments:

Email ThisBlogThis!Share to TwitterShare to FacebookShare to Pinterest
Labels: Commodities

Just when I thought that today will be just another day since DOW Jones was just consolidating last Friday, the news just broke out. California based research firm, Glaucus Research, published a report alleging irregularities in the company, China Minzhong.
Here is the report which the company has published.
https://glaucusresearch.com/wp-content/uploads/downloads/2013/08/GlaucusResearch-China_Minzhong_Food_Corp_Ltd-SGX_K2N-BBerg_MINZ_SP-Strong_Sell_August_26_2013.pdf

Now we just have to wait and see what the response will be from China Minzhong.

Early this year, the same research firm, Glaucus had also reported on another chinese based company, China metal recycling (CMR). Below is the article on what happened after.

In life, I guess nothing is certain, one has to make sure that we are not overly confident and invest all our eggs into 1 basket.

Email ThisBlogThis!Share to TwitterShare to FacebookShare to Pinterest
Labels: Stock

By now you should have read that both gold and silver are in and still in the bear territory, since 50MA is still below 200MA. However, since July, we have seen both trending upwards. Is it a buy signal?

Looking at gold TA, there are still a number of resistances;
1. First gap down(first oval), though this has been filled by the last few days
2. 2nd gap down, which it still has some way to go
3. And it is still way below the 200MA

Above observations applies to silver as well.

At the newsfront, based on an article by Bloomberg, one of the most bullish investor in gold had cut stake by half.
http://www.bloomberg.com/news/2013-08-14/paulson-cuts-spdr-gold-stake-53-as-soros-sells-out.html

Email ThisBlogThis!Share to TwitterShare to FacebookShare to Pinterest
Labels: Commodities


Looking at the weekly chart of STI, are we heading to start of wave C?

Email ThisBlogThis!Share to TwitterShare to FacebookShare to Pinterest
Labels: STI

Since the huge correction, is it now the right time to relook at Apples shares again? It seems the 3rd quarter numbers are not bad. businessweekprofit-estimates-in-3rd-quarter

From TA perspective, it seems the 10MA weekly chart is supporting at this level. Looking at the right side of the chart, it had also breakout after testing twice it's support. Would the uptrend continue?

Email ThisBlogThis!Share to TwitterShare to FacebookShare to Pinterest
Labels: Stock

This stock came up from my weekly scan using 'mygateway' and putting in the criteria of high ROE and dividend. Upon further check, most of the Internet article shown that fundamentally it is poor. The most recent report can be gotten from here, SG-Technics_Oil__Gas_20130520.pdf

However, on looking at the chart, from TA perspective, the 10MA is trending up but there is still alot of resistance as it is still below the 200MA which is arching down. Check out the red box, it seems that since May, folks are accumulating this stock ... ...

Oldman
Me am simple man with simple needs ...